Posted by hungtran86 on June 26, 2013
Like Pokemon, Monster MMORPG lets you collect, train and battle with Monsters. But better than Pokemon, it is an Online RPG game, with people cooperating and challenging each other all around the world! Most likeness to THAT game is purely coincidental at this very point, however, because Monster MMORPG is brimming with original content.

From Palladium Town to Vulture Rocks and everything in between, Monster MMORPG has a shocking total of 83 completely unique maps! In the vast majority of these maps, players can hunt for Monsters to add to their collection; the sum of these Monsters adds up to a staggering 659 Monsters of every color, shape, and size. With so many Monsters out there for the catching, players are highly encouraged to progress through the game from island to island using ships as their main method of traveling to other landmasses until they are able to teach a Monster a special move which allows them to traverse the ocean, or perhaps Fly them directly to their destination. 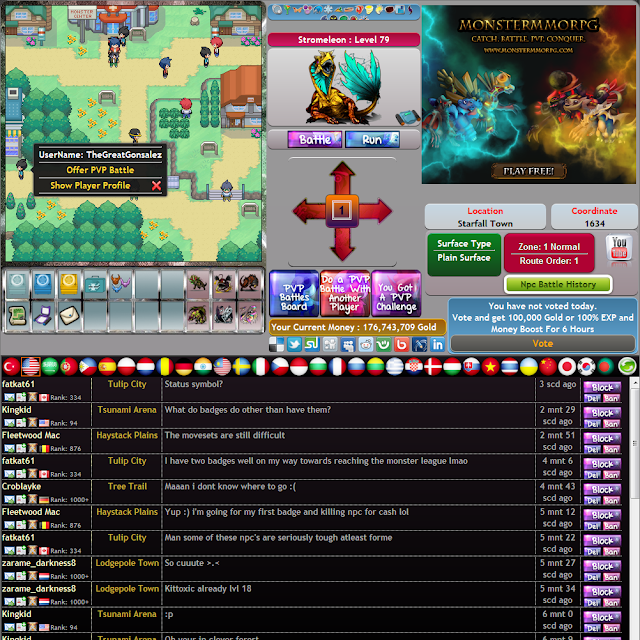 As players progress, the Monsters get rarer and more durable which leads players to taking advantage of Monster MMORPG's Monster Centers and Shops. Monster Centers are essentially the medical and storage hubs of the Averium Isles where Monsters can be put away for safekeeping or simply have their Health Points replenished. Shops are where players buy any and all items, but not necessarily just items! Every Shop visited has two branches of merchandise: Game-sold items and player-sold Items. Items sold by the game are things like Monster Boxes which are used to capture Monsters, or Tasty Potions which are effective for healing Monsters on the go. The items sold by players are accessed at any Shop and listed in a Bazaar or marketplace and put up for sale with any price the player desires. 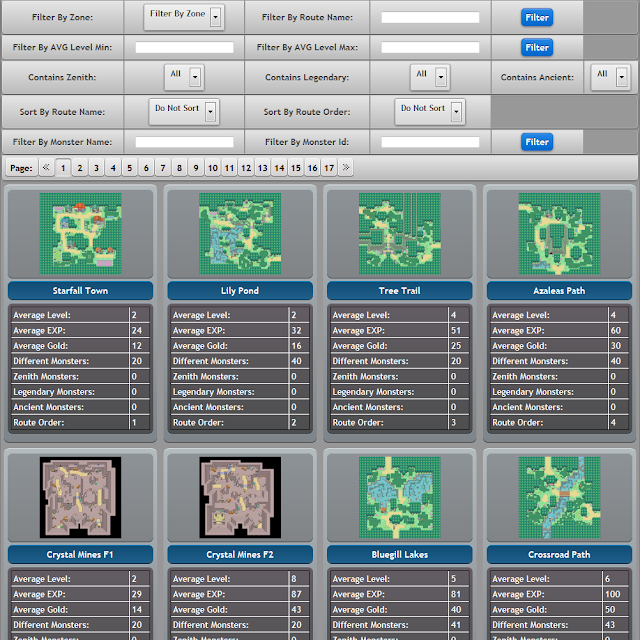 However, the Bazaar is more commonly used for selling and trading Monsters. With a thriving economy, players will often look to sell their duplicate or rare Monsters for very generous profit which will allow them to buy other items, such as Monster boxes which permits them to catch more Monsters to sell and repeat the cycle. Rarity of Monsters is determined through a specific tier system. From most common to rarest, these are the tiers: Regular - Superior - Emissary - Zenith - Legendary - Ancient. Rarity of a Monster is generally heavily linked to the Monster's overall power, making rarity a key factor when building a strong team of Monsters. Because the upper tiers are hard to find, their value is augmented. Even at early stages in the game, players have ample opportunity to hunt for rare Monsters. 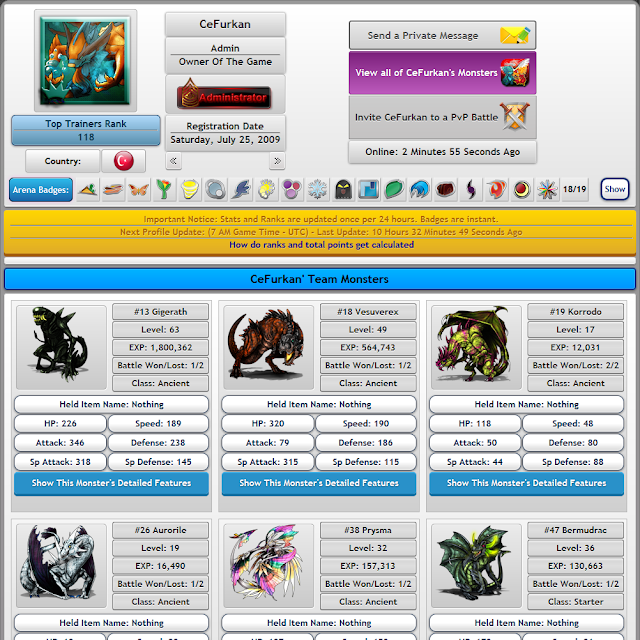 On their journey, players will encounter various kinds of geography and all manner of Monster habitats, everything from lush forests and choking deserts to volcanic caverns and icy wonderlands! All the while on the move, players can access a built-in chat and private messaging system allowing them to communicate and interact with other players. The chat is divided into a grand total of 32 different languages so that no matter where you're from you can type in your native tongue. Staff members watch the chat daily to make sure that nobody tries to spoil anyone's fun, ensuring that every player may enjoy the game to its fullest. Aside from casual chatter, players are also brought together through competition; PvP plays a very heavy role in the game, because winning battles earns you precious points and the top 1,000 players have their exact rank listed in the chat (anything above 1k is shown as "1,000+"). Being in the "Top 1k" is considered a feat of determination and carries with it a strong sense of notoriety and success. 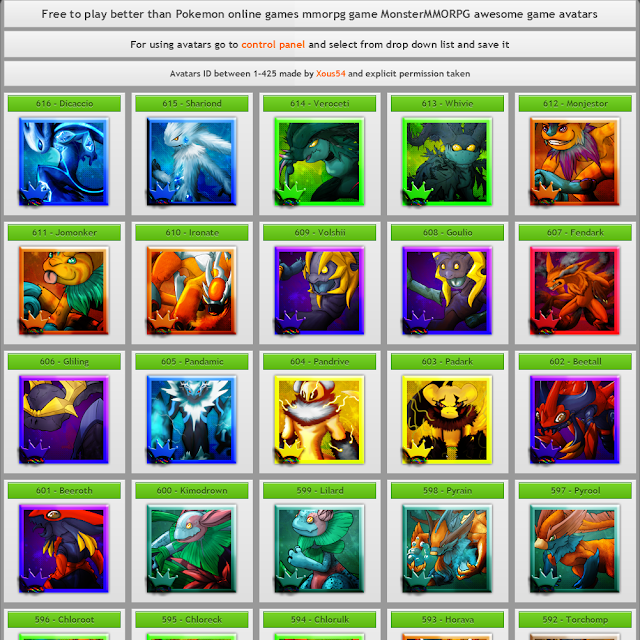 PvP is a very in-depth matter at Monster MMORPG because of all the fun variables that take place in each and every battle. There are 18 different Monster Types, each with strengths or weaknesses against other types. Some types even have resistances or are unaffected by certain types. Moves also have one of the 18 elemental types, however they are further diversified by being split into "Physical", "Special", and "Supplementary" moves. Each Monster has six stats which determine their net strength; those six are Health Points (HP), Attack (Physical), Defense, Special Attack, Special Defense, and Speed. Defense decreases damage taken from Physical moves and Attack increases damage dealt by your Monsters own Physical moves. Likewise, Special Attack and Special Defense work similarly. Battle is turn-based with both Monsters performing one move per turn, and Speed determines who attacks first in a turn. HP dictates the total Health Points you have; the higher your Monster's HP, the more times an enemy Monster has to hit it to defeat it. Supplementary moves are moves that do not do damage but boost one or several stats and strengthen a Monster; some Physical and Special moves have Supplementary effects, however because they deal damage they aren't classified as Supplementary. With 118,003 registered users and rising, you're never going to run out of new people with which to test your skill! 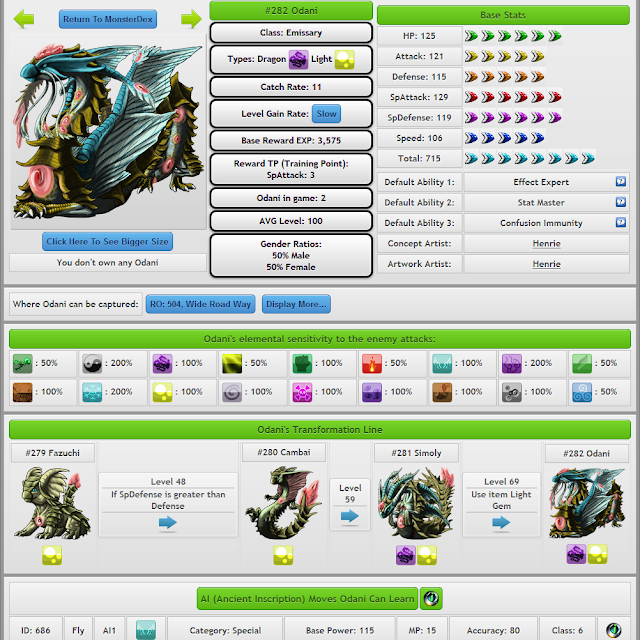 There are plenty of customization options, such as user avatars and overworld sprites. You'll even be able to give your Monsters their own nicknames!

Whether you're casual or hardcore, solo or competitive, hermit or cooperative, Monster MMORPG is the game for you. Remember, it's free to play and not pay to win!

Last week, NetEase held a conference call with various financial analysts following its quarterly financial call where they announced their performance for the 4th quarter of 2018 and the year ending 2018. Only 1 analyst, Alex Poon from Morgan Stanley, asked about the progress of Diablo Immortal. 2 sets of answers were given by the NetEase executives, one in Chinese and one in English. It seems that Diablo Immortal is ready to launch from NetEase’s development point of view, but Activision Blizzard is holding out on the schedule. Reply 1: Original reply in Mandarin Chinese 暗黑手游的发布情况，最后我们会跟暴雪同步来宣布什么时候推向市场。但是我们这边开发方面已经做了非常充分的准备和投入，我相信肯定不是开发上的问题。 Reply 1: Translated by MMO Culture from Mandarin Chinese With regards to the launch of Diablo Immortal, we will announce a market launch date simultaneously with Blizzard. But on our side, development is already fully prepared and invested. I definitively believe there is no issue from the side of development (with regards to a launch

ISOTX, developer and publisher of the award-winning Iron Grip-series, announces today that the premiere episode, Soviet Storm , of their free-to-play cross-platform episodic online multiplayer strategy game M arch of War is available now through Steam Early Access and the official website for PC and Mac. March of War Episode 1: Soviet Storm tells the story of the Soviets violating the peace treaty and invading the city of Paris with an all-out attack. This is embodied by a compelling in-game world event, in which the Soviet Union and European Alliance play the lead role. This episode will see players aligned with these factions, and joining the fight for Paris armed with newly released units. Below is the trailer for this episode. Some of the new units players can look forward to for this occasion include: Cossack Cavalry, the French Panhard Tank, the German Sturmtiger, the Cannon Walker, the Soviet Maxim MG Team and much

Pokemon X & Y is drawing much hype than ever around its release this October on Nintendo 3DS which promises a high quality 3D graphics blended with classic cute 2D anime drawing style. But Pokemon cannot be exclusive for 3DS players... at least that is the idea of the brand new indie game Pokemon Garden  built on HTML5 which is coincidentally on our list recently! Pokemon Garden has all what fans love about, including adorable pixel arts, fun lines of characters, beautiful Pokemon designs, etc. In fact it really reminds us of the time when we are hooked on the old Gameboy device playing Pokemon for hours. But this time we can play it everywhere on browsers of PC, tablets, smartphones thanks to the potential HTML5 technology. In Pokemon Garden, you start as a young boy with a sense of adventure and your mom quickly hurries you out of the house to go catching Pokemon lol. But it is the hard life out there without a Pokemon of course! Then you are given a free choi